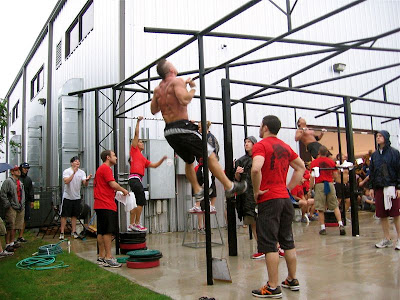 Since I love CrossFit I will be following the games. The widget on the right will link you to the page to see all updates. Here is all the information I have gotten off the site. This is so exciting and I know we are going to see some amazing athletes. The scoring for this year's event will be one point for each place at each event. For example, first place gets 1 point, second 2 points, third 3 points, fortieth 40 points, and so on. Ties get the lower number and the next competitor gets his or her place. For example, Bob and John tie for thirteenth and Dan comes in right behind them in fifteenth. Bob and John each get 13 points, while Dan gets 15 points. The man and woman with the lowest total points after all the events are Champions, and the team with the lowest total points after all events takes home the Affiliate Cup.
The Individual Competition
The Individual competition on Saturday, July 11 will be comprised of five events. All athletes will compete in the events in the same order. At the end of each event, the results will be announced with the relative ranking of each athlete determining their score as described above. The overall ranking going into each event will determine the reverse starting order for that event. For example, the athletes that win the first event will get to go last in the second event, while the athletes that come in last in the first event must go first in the second. The athletes in the lead (those with the lowest running total) after two events get to go last in the third event. And so forth. Not all athletes will stay in the competition. After the second event, the bottom ten men and the bottom ten women (those with the most points) will be eliminated from the competition. After the fourth event, the remaining bottom ten men and ten women will be eliminated from the competition. At this point, there will be approximately 55 athletes competing in the final event (for each men and women). The day will conclude after the fifth event. At that point, the 16 men and 16 women with the lowest total points will be invited to compete on Sunday. If by chance there is a tie for 16th place, the athlete with the best single placement in any of the five events will be awarded the invite. There will be multiple events on Sunday, and the same scoring by rank will continue and be added to Saturday's totals. At the end of Sunday's events, the man and woman with the fewest total points from all events on both days will be crowned Champions.
On Friday morning 0600 PDT, we will publish the workouts, movement standards, and schedule for Saturday's Individual competitions.
(Courtesy of Games2009.crossfit.com)
Posted by Chad E Smith at 5:15 AM