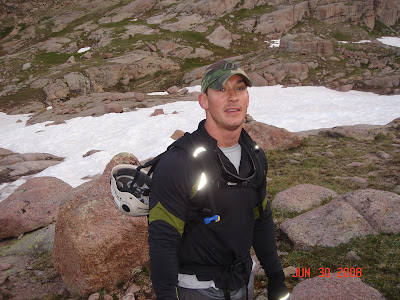 Mount Wilson is a fourteen thousand foot mountain peak in the U.S. state of Colorado. It is located in the Lizard Head Wilderness in Dolores County approximately 10 miles (16 km) north of Rico and 10 miles (16 km) southwest of Telluride. It is the highest peak in the San Miguel Mountains, a subrange of the San Juan Mountains. It is not to be confused with the lower, nearby Wilson Peak.
The peak was named for A. D. Wilson, a topographer with the Hayden Survey. He was in the first ascent party, which climbed the peak on September 13, 1874, via the south ridge (a difficult route, not often climbed today).Mount Wilson is ranked among the top ten hardest of the Colorado fourteeners to climb. The standard climbing route ascends the North Face from Navajo Basin. Some permanent snowfields exist high in the basin (sometimes termed "Navajo Glacier") and the climb usually involves snow travel, with ice axe and crampons recommended. Scrambling on rock then leads to the summit.
A popular, though long, outing for expert climbers is the mile-long ridge connecting Mount Wilson to El Diente Peak. The ridge is sharp and rocky, and requires difficult scrambling and often a small amount of rappelling.