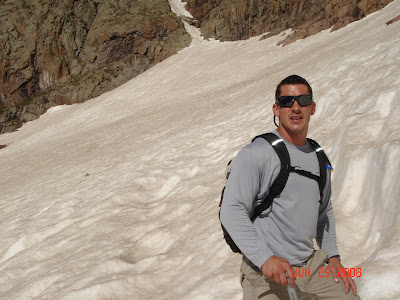 El Diente Peak is a fourteen thousand foot mountain peak in the U.S. state of Colorado. It is located in the Lizard Head Wilderness in the San Miguel Range of the San Juan Mountains, in Dolores County approximately 10 miles (16 km) north of Rico.

The topographic prominence of El Diente Peak is only 239 feet (73 m), so by a strict 300 foot cutoff rule it would not be counted as a separate peak from its higher neighbor Mount Wilson. However the 3/4 mile (1.2 km) connecting ridge is a significant climbing challenge (Class 4/5), making El Diente more independent than its prominence would indicate.[3] Hence it is often regarded as a fully-fledged fourteener.

El Diente is one of the more dramatic peaks in Colorado in terms of local relief and steepness. As a result, it is one of the most challenging climbs among Colorado's fourteeners. All routes involve at least class 3 scrambling on loose talus, and poor route-finding can expose the climber to more difficult and dangerous terrain.