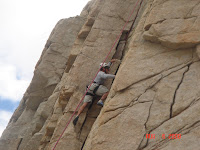 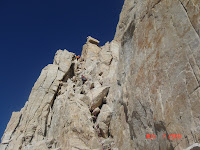 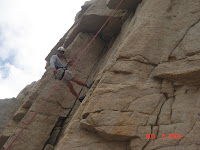 Rock climbing is a sport in which participants climb up or across natural rock formations or man-made rock walls with the goal of reaching the summit of a formation or the endpoint of a pre-defined route. Rock climbing is similar to scrambling (another activity involving the scaling of hills and similar formations), but climbing is generally differentiated by its need for the use of the climber's hands to hold his or her own weight and not just provide balance.
Rock climbing is a physically and mentally demanding sport, one that often tests a climber's strength, endurance, agility, and balance along with his or her mental control. It can be a dangerous sport and knowledge of proper climbing techniques and usage of specialized climbing equipment is crucial for the safe completion of routes.Top roping is climbing with the protection of a rope that's already suspended through an anchor (or also known as a "Top Rope System") at the top of a route. A belayer controls the rope, keeping it taut, and prevents long falls. Most Indoor climbing or "gym climbing" is top roping on indoor purpose-made climbing walls although it's also common to boulder and sport climb indoors. Gym climbing is used as training for outside climbing, but some climb indoors exclusively. Due to its simplicity and reduced risk, most beginners are introduced to climbing through top-roping.
Posted by Chad E Smith at 5:12 AM