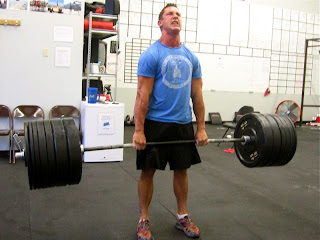 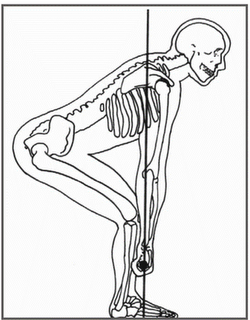 The deadlift is a weight training exercise where one lifts a loaded barbell off the ground from a stabilized bent-over position. It is one of the three gauges of powerlifting, and is an excellent exercise for overall body development if done properly. It is, in a sense, the purest single event test of strength because it is one of the few lifts of dead weight (weight lying on the ground). In most other lifts the weight changes direction or starts in the air and several other athletic skills such as balance, coordination are emphasized. For example, both Olympic weightlifting events require a great deal of athletic skill in addition to strength. In addition, it is commonly believed to be the oldest test of strength dating back to cultures who competed at lifting the heaviest stones. In order to prevent the bar from rolling out of the hands, some lifters have been known to use an Olympic lifting technique known as the "hook" grip. We use the hook grip at Next Generation Crossfit. This is similar to an overhand grip, but the thumbs are inside, allowing the lifter to "hook" onto them with the fingers. The hook grip can make it easier to hold heavier weights using less grip strength, and keeps both shoulders and elbows in a symmetrical position.
Posted by Chad E Smith at 4:32 AM