How To Perform the Clean and Jerk Lift 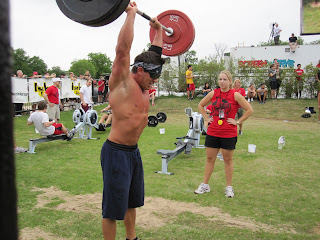 The Clean & Jerk is one of the two lifts used in Olympic Weightlifting and it consists of two stages. The first stage, called the clean stage, is a lift where the barbell is picked from the floor and placed on the shoulders in one motion. After a pause, the athlete goes to the second stage of the motion. In this second stage, the athlete lifts the barbell into an overhead position while placing the legs in a lunge position (one leg on front of the other).Place your feet at a shoulder width stance with the barbell resting right above the connection between the toes and the rest of the foot. With a palms facing down grip, bend at the knees and keeping the back flat grab the bar using a shoulder wide grip. Start lifting the bar by pushing the floor as if it were a moving platform. Once the bar reaches the middle of your thighs, lift your shoulders up in a powerful shrugging motion while your feet jump out to your sides and you raise the bar to your shoulders. At the end of this step, you should be at the bottom of a front squat position; the bar is right under the chin, elbows are held high in front of you and your knees are bent. (Caution: If your elbows touch you knees this will invalidate the lift). While holding the bar in front of you, squat up and catch your breath in preparation for the final part of the lift. Dip down before you raise the bar overhead and push your feet back into the floor as you dip. Since you will be pressing up as you begin the dip, at first the bar comes down a bit but then goes back up. This video is 155lb squat clean & jerk. I know you have seen this video and picture, I will make new ones this weekend at the certification.